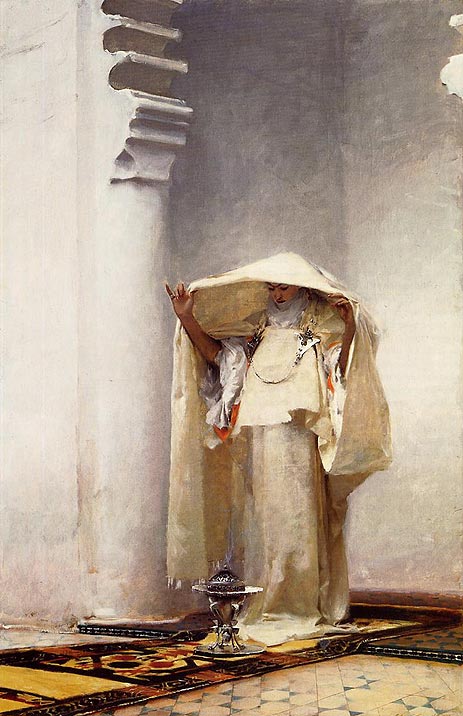 John Singer Sargent
Fumee d'Ambre Gris, 1880
"Smoke of Ambergris" was the product of John Singer Sargent’s trip to North Africa in the winter of 1879–80. One of two paintings that he sent to the Paris Salon of 1880, it is his own interpretation of Orientalism, a common theme at that time in which artists sought out exotic subjects. The painting depicts a heavily draped woman inhaling the smoke of ambergris—a resinous substance found in tropical seawater and believed to come from whales. It was thought in the Near East to be an aphrodisiac, as well as a safeguard from evil spirits. The model, of whom Sargent made several sketches, probably lived in cosmopolitan Tangier. In a society that forced women to be intensely private, working as a model would have relegated her to its outer fringes.

John Singer Sargent reaches through and grabs me by my art heart. Something in his work has always spoken to me. I've added more of his individual works in a separate thread dedicated to him. It is never enough...

Jump to
Powered by phpBB™ • Design by PlanetStyles